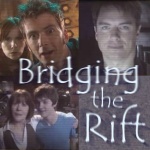 We also discuss your ideas about continuing Torchwood after Children of Earth and play out with more Time Lord Rock music.

@ 15 minutes 10 seconds – Could the Doctor ‘help’ Jack by removing his memories, as he ‘helped’ Donna in Journey’s End?

@ 29 minutes – Listening to some fans, you’d think Russell T Davies was the worst thing to happen to Doctor Who, why is this?

@ 1 hours 46 minutes 20 seconds – We’re sure that not everyone will agree with the opinions discussed in this episode. If you disagree or have any other comments, please send your feedback via bridgingtherift.wordpress.com, in email to our GoogleMail or directed @BridgingTheRift on twitter.

Next week we’ll be revisiting trock in our rebuttals section and looking at the best way for fans of the new series to explore the classic series.

@ 1 hour 47 – We trock out to You Are Not Alone by KronksSpinachPuffs now known on YouTube as songsfrompaul. Thanks to Paul for kind permission to use this song.

This entry was posted on Thursday, August 20th, 2009 at 2:22 pm and is filed under Uncategorized. You can follow any responses to this entry through the RSS 2.0 feed. You can leave a response, or trackback from your own site.

9 Responses to Bridging the Rift #4: Russell T Davies and Fandom